September 25, 2019 by ProofreadingPal in Writing Guides

Here’s a thing that happened to me. In addition to magazine journalism, I occasionally write short fiction. A couple of years ago, a story I’d sold was being prepared for publication, and I got into a back-and-forth with my editor about a choice of words. In the story, the viewpoint character walks down the main street of his hometown, taking note of the buildings as he passes: Masons lodge, flour mill, fire hall.

The first of these surprised my editor. She emailed me: Was this an error? Had I meant to write “Masonic lodge”? I wrote back that no, I had chosen the nonstandard “Masons lodge” quite intentionally (as I had “fire hall,” rather than the more common “fire station) for its rhythmical value.

In the study of prosody (introduced in last month’s blog), we would say that each of these phrases has the same meter. To be precise, each is a dactyl, a metrical foot consisting of a single stressed syllable followed by two unstressed syllables.

The story was in prose, not in verse, but the repetitive cadence of those three dactyllic phrases created (as I explained to my editor) a singsong effect that suggested both the character’s loping gait and the humdrum nature of his downtown stroll.

My editor left the passage unaltered and emailed me back, “You’ve really thought about this.”

Your Voice is in Your Choices

The glorious and intimidating thing about the English language is its bounty of options. Whatever we want to say, there are multiple ways to say it. It is our choices that render our language straightforward or confusing, memorable or boring, elegant or awkward.

In poetry, those choices are hyper-visible. Poets choose syntactical constructions and individual words for their sound as well as their meaning. We can do the same in prose: “Masons lodge” means exactly the same thing as “Masonic lodge,” but in context it feels different—less important in itself than as one in a series of faceless buildings lining a generic small-town street. That string of dactyls gives the effect of a list rattled off by rote.

Fiction, of course, is expected to handle language in a slightly elevated manner—not so much as in verse, but elevated nonetheless. But there’s no reason you can’t apply this same method to a piece of everyday writing like a financial report or an interoffice memo.

Aim for an Effect

Let’s say you’re writing a paper presenting the results of an experiment wherein you ran a bunch of trials subjecting different chemical formulas to the same experimental conditions, with similar results every time. Dreary stuff, right? But you can use rhythmic devices to highlight the monotony of the results—which, perhaps paradoxically, makes the passage more fun to read.

Subsequent experiments proceeded in identical fashion. The reformulated solution was brought to a boil for 2 hours, then removed from heat and stirred for 4 hours. After being allowed to rest for 48 hours, the solution was observed for evidence of crystal formation.

The second round of tests was just the same. The modified solution first was boiled 2 hours, then stirred for 4, and left to rest and cool for 48, after which we searched for any signs of crystal growth.

The passages are identical in meaning, both describing the same procedure. But the rhythmic drive of the second makes the reader feel the repetition. And the metrical element is not immediately obvious unless you’re looking for it; the reader will simply note that it rolls trippingly off the tongue. 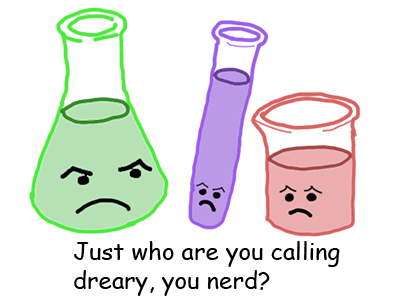 Admittedly, this is an exaggerated example; you needn’t commit to full-on iambic pentameter, as I did. But a steady pulse effectively emphasizes the cyclical nature of a process. Rhythmic devices can also adjust the perceived velocity of a passage; two-syllable feet like iambs and trochees tend to “read” more briskly, whereas anapests can slow things down. With only your choice of words, you can alter your reader’s perception of time just as a filmmaker does with slow-motion photography.

The most important choice in deploying any poetic device is where and when to do so. I’m not suggesting that you write your company’s annual report entirely in heroic couplets (although—and I say this in all seriousness—I, personally, would love to see you try). In all writing, your Number One goal should be clarity. But if you feel that you can inject a touch of rhythmic dash into an otherwise-mundane piece of writing without sacrificing meaning, go for it.

Too many writers, especially in academic settings, are so worried about how their work will be judged that they don’t allow themselves to take any joy in writing. If your work is a chore to write, it will be a chore to read. Don’t be afraid to have fun and experiment a little—especially when you’ve got the editorial guidance of ProofreadingPal to help your experiments succeed!