Should I Use First, Second, or Third Person?

September 3, 2015 by ProofreadingPal in Writing Guides

A Definitive Guide to Using Perspective in Academic, Business, and Fiction

Is it OK to use first person (I/my/we/our) in a research paper or job application? Is all formal writing done in third person (he/she/they/one)? Why does the teacher keep crossing out second person (you/your) in student essays?

The issue here is perspective. First person is direct and personal. Second person is aimed at the audience, as in advertising (“You should buy this car now!”), or is quite informal, as in e-mails to a friend (“So, you know how it is when you don’t have any money?”). Third person doesn’t target anyone, and so it’s the most distant and universal.

It’s pretty easy to avoid second person in formal writing, so the main source of confusion comes from whether to use first or third person.

This business of having to use third person, however, can result in imprecise language and, worse, ambiguity. Most academic styles now recommend first person, with APA leading the way.

“A study was conducted on animals. The researchers utilized a longitudinal study. This paper will examine the mating habits of the fennec fox.”

What at first seems like a nice formal start to a paper is actually quite ambiguous. Regarding the first sentence: what study? Conducted by whom? This passive voice is too imprecise.

The second sentence uses third person, but if your paper is talking about other studies and sources, then you might confuse your reader. Is this your term you’re talking about, or one of the past researchers? 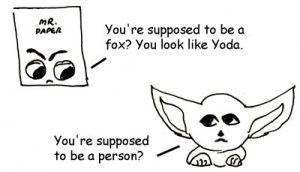 The third sentence turns the paper into the researcher. A paper cannot examine. It’s not alive. Only you, the writer, can examine anything. In this situation, the truly clear sentence is, “In this paper, I will examine . . .”

For these reasons and more, first person is now more often being recommended. Of the “big three” (APA, Chicago, MLA) style guides, APA urges first person. The Chicago Manual of Style is also in favor and says under 5.220 (16th ed.), “When you need the first-person singular, use it. It’s not immodest to use it; it’s superstitious not to.”

MLA (used for the humanities) has skirted the issue, but seems to prefer the formality of third person. It doesn’t like self-aware statements like, “I am going to say in this paper…” However, as long as the instructor or client does not mind, MLA finds first person acceptable when necessary.

The question of what perspective to use in a story or novel is a personal one. There are no rules. Generally, writers are recommended to use third person when they’re just starting out because it’s a bit easier to get right. With third person, you can write in a detached, generic way, and when you write fiction in first person, it’s exceedingly real and present. Everyone has a different (and distinct) personality, and that personality leaps out when you write in first. In first person, little mistakes and breaks in personality really stand out for the reader.

It is not accepted in mainstream fiction to mix first person and third person.

Use first person for such situations as autobiographies (unless you’re Donald Trump), but for most non-fiction work, it’s best to stay detached. Use third person.

AP style for journalism and marketing is strict about not using first person to refer to oneself. Stick to third, try to avoid pronouns, and reserve first person for direct quotes in interviews.

Don’t refer to yourself in the third person in resumes. Just as in life (unless you’re Trump) you wouldn’t say, “John develops synergistic platitudes,” when you’re John. In a resume, just assume the first person is understood. Under current job duties, say “Develop synergetic programs,” not “Develops.”

With business, there are no hard and fast rules. Gear your writing to your purpose and what level of formality you think is appropriate. Perspective can increase and decrease that level. For example, look at this formal sentence:

“Microsoft is looking to expand into new areas. It aims to attract talented new people.”

However, some people might say that looks too stiff, so look at this more easy-going and personal version:

“Microsoft is looking to expand into new areas. We are looking to attract talented new people.”

Second person can also be useful in business writing, especially when giving orders or advice:

“Microsoft is looking to expand into new areas. Be sure to attract talented new people.”

Just remember that choosing your person-perspective has real consequences. Be careful, and good luck.