March 28, 2017 by ProofreadingPal in Writing Guides

One of my favorite sayings is, “Everything in moderation.” I have thought about this expression often recently because I’ve noticed immoderate use of a certain type of punctuation: scare quotes. Regular quotation marks are necessary, and scare quotes can serve a purpose, but too much of a good thing is still too much.

Too much time in the sun: fatigue and sunburn. Too much red wine: loose lips and hangover. Too many scare quotes: lost meaning and misunderstanding. In today’s post, I’ll discuss what scare quotes are and why they must be used with care.

Scare quotes have their own name because they are not used for those purposes but for something different and specific. Writers put them around a word or expression to draw attention to its unusual usage.

The minister found the stripper’s attire somewhat too “mature” for vacation bible study.

This can be quite helpful, but only if it’s done right, and there are a few reasons you should pause before you use scare quotes. 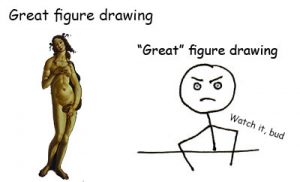 Scare quotes are rarely necessary and frequently send the message that the writer couldn’t be bothered to state things clearly. If you think people might not know what you mean, instead of using scare quotes, explain the term. If you’re a little worried that you’re not being clear even though you’ve stated your point without irony or innuendo, trust that your readers will understand rather than distracting them.

If you’re introducing and defining a term that may be unfamiliar to your reader, there’s no need for scare quotes:

Some people feel the newspaper is just a bunch of argle-bargle (meaningless talk).
A common error in grammar is a comma splice (using a comma when it should be a period).

Scare quotes may send the wrong message. The most frequent purpose of scare quotes is to indicate irony or skepticism, so when readers encounter scare quotes that’s often the message they think the writer is trying to deliver, even when it’s not. So, for example, you might write:

Note that instead of simply indicating that you did the action of clicking the like button, you could easily come across as implying that you mean the opposite of what you are saying: that you didn’t like her post. Note that getting rid of the scare quotes fixes the problem.

Clarity is already hard enough to achieve without inadvertently sending a signal that you’re telling a joke. Whether it’s an informal email or your dissertation, you need to be careful not to leave the reader wondering if you meant what you said or the opposite.

So leave the scare quotes off. If you feel it’s important enough to use scare quotes, just explain yourself with words instead; don’t assume your readers will know what your scare quotes mean (“like” like, didn’t “like,” like “button”?).

Scare quotes usually create an informal tone. Scare quotes are the written equivalent of air quotes, which are rarely used (or should rarely be used) in formal situations. You don’t want your final exam to read like a Steve Martin routine.

If you are trying to be ironic and casual and you think your audience will get what you’re doing, go ahead and use scare quotes, but even then do so in moderation. You don’t want your “writing” to start having a “tone” others find “questionable.”

P.S. For some fun examples of how incorrectly used quotation marks can have unintended meanings, see this.