Place Order Get Instant Quote Free Sample
Home  /  Writing Guides   /   What Is Passive Voice and How Do I Use It?

What Is Passive Voice and How Do I Use It?

September 25, 2015 by ProofreadingPal in Writing Guides

For those of you not lucky enough to be a grammar nerd like I am, here’s a quick terminology review. The sentence, “I read books,” is in active voice; the subject, “I,” is completing an action, “read.” The sentence, “Books are read,” is in passive voice; the subject, “books,” is being affected by the action of the verb, rather than completing the action itself. Passive constructions have some form of the verb “to be” with the main verb.

Writers may use the passive voice to avoid referring to themselves because they want to be vague, even though to do so is imprecise and can even be somewhat dishonest. Academic writers may mistakenly use the passive to avoid the first person (“I” or “we”) because they feel referring to themselves in their work will not seem impartial enough (see Nick’s post on the use of first and third person).

Politicians may use the passive voice to avoid connecting their names to something they think may come back to bite them later. Think of the classic: “Mistakes were made.” This line has been used by many politicians, including Ulysses Grant and Ronald Reagan, to refer to mistakes by their administrations yet avoid connecting themselves to those mistakes. It’s not so honest and definitely not precise. 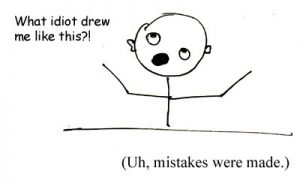 Finally, passive voice can weaken a writer’s point or make it seem like he doesn’t really believe the point he is trying to make. Picture a superhero saying, “I will defeat you!” Now picture her saying, “You will be defeated!” Which version is stronger, firmer, and more active? The first sentence—the active sentence—presents a superhero who will accomplish her goal.

There are certain cases in which the passive voice is useful. First, when the actor is not known or is not important, the passive voice is acceptable: “This popular folk song was written in the mid-eighteenth century.” The passive is also useful when a writer wants to emphasize the thing acted on rather than the actor, as in this sentence: “The horses are ridden everyday.” And sometimes an author intends to be vague, especially in fiction writing: “While they were outside, the cake was smashed and the coffeepot was thrown to the floor.”

In general, though, the active voice is much clearer, more concise, and direct: all qualities of effective writing. Use the passive voice only if you need to.