June 27, 2019 by ProofreadingPal in Writing Guides

There are really only two ironclad rules of good writing, and Rule 2 is functionally a subset of Rule 1:

Any other rules you’ve heard (e.g., show, don’t tell; avoid the passive voice; use plain language; kill your darlings) are just means to an end. There’s nothing sacred about them. They’re all tactics to be used in pursuit of clarity, and thus arbitrary to an extent. You can write a passage of ornate prose, passive voice willy-nilly, telling without showing, and as long as the meaning is clear, it’s good writing, at least, for everyday purposes.

Some academic standards of writing, though, present some of these commonsense guidelines as hard-and-fast restrictions, and sometimes those restrictions work at cross-purposes to the goal of clarity and indeed to one another.

Here’s an example we see quite a bit here at ProofreadingPal. Some professors (usually in the hard sciences, for some reason) frown upon first-person language, meaning that sentences with “I” or “we” could count against a writer’s grade. I’m not sure why this stricture exists; perhaps it’s meant to eliminate the appearance of bias in data-driven subjects. In any case, it necessitates workarounds, some of which cause their own problems. 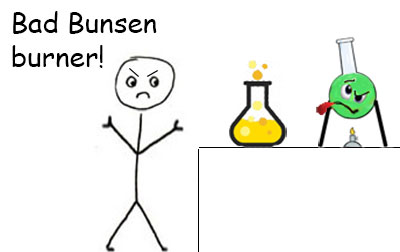 And that’s the real argument against overusing the passive voice: allowing writers to sidestep questions of accountability hinders clarity. For many readers, passive voice seems slightly evasive. It’s the rhetorical device that organizations use when they don’t want to admit wrongdoing.

Thousands of gallons of polluted water were released into the aquifer
A man was shot during a traffic stop.

So if first-person phrasing is out, and passive voice seems shifty, how do we describe what happened to that experimental solution? After all, somebody must have boiled it. Somebody, or something. How about, “A Bunsen burner heated the solution to its boiling point”?

This rhetorical device is called anthropomorphism. It attributes a given action to an inanimate object or concept.

A car crashed into a tree.
The data show causation.
The light hurts my eyes.

Anthropomorphism can be a nifty way to get around restrictions on first-person language, but it too can be problematic. Because it assigns the action to a lifeless thing, it, like the passive voice, can be used to confuse the question of responsibility. A Bunsen burner does not act of its own volition; neither does a car.

Take: “Polluted water flowed into the aquifer.” While technically true, doesn’t put any person on the hook for negligent endangerment of human lives. “Three bullets struck a motorist during a traffic stop” makes it sound as if those bullets were simply wandering around on their own before hurling themselves at some poor slob, when in fact it was the police officer or criminal who chose to draw and fire their weapon, and thus a person bears ultimate responsibility for any injury or death.

For this reason, many academic writing standards (APA in particular) strongly discourage anthropomorphism, with exceptions only for phrases like “the data suggest” or “the chart indicates” with the understanding the data and chart ultimately come from people.

Faced with these contradictory restrictions, the writer is backed into a corner. And this, more than anything else, is why passive voice is so pervasive in academic papers. It’s unpopular with writing instructors, but isn’t actually forbidden, and you may find it the most comfortable way to work within your professor’s edicts.

Remember too that restrictions are rarely absolute. Your instructor may disapprove of first-person language generally, but you can—and should!—use it in moderation, where it is the most appropriate choice. The same goes for occasional anthropomorphism: “Bubbles formed on the surface,” for instance, is obviously a better choice than “Bubbles were observed forming on the surface.” If forced to choose between obeying an editorial restriction and expressing yourself clearly, well, remember the only real rule of good writing.