Whether your first language is English or not, you must have mixed your metaphors a time or two. In conversation, it’s not a biggie. Everyone (unless they’re an editor with no social skills) pretends it didn’t matter, and life goes on.

But in writing, these matter. They sit there and taunt the reader to notice something is wrong, and usually they succeed.

Let’s get into why mixed metaphors are a problem and how to avoid them.

OK, a metaphor occurs when you describe something in terms of something else.

Metaphors are a wonderful means of introducing everyday poetry into language. One of my all-time favorites appears in MLK’s “I Have a Dream,” where he’s trying to explain that “all men are created equal” hasn’t been working in America. Now, King wants to describe an injustice, but he doesn’t want to incite the crowd to anger, so he picks a metaphor that shows an obvious lack of justice but not an incendiary one:

In a sense we’ve come to our nation’s capital to cash a check. When the architects of our republic wrote the magnificent words of the Constitution and the Declaration of Independence, they were signing a promissory note to which every American was to fall heir. This note was a promise that all men, yes, black men as well as white men, would be guaranteed the “unalienable Rights” of “Life, Liberty and the pursuit of Happiness.” It is obvious today that America has defaulted on this promissory note, insofar as her citizens of color are concerned. Instead of honoring this sacred obligation, America has given the Negro people a bad check, a check which has come back marked “insufficient funds.”

Seriously, I can’t think of a better metaphor here. A bounced check is something everyone can recognize as unfair, but it’s not the sort of thing that makes you grab torches and pitchforks to march on your enemies to hear the lamentations of the women. In fact, you have to work within the system to get your money.

Although metaphors let you do all kinds of wonderful things, they do come with some stipulations, and the main one is that you have to respect the “other thing” you’re using as a comparison.

Here’s a sentence I turned in once at school:

The author breaks the bridge between the two ideas to get to the juicy issues underneath.

Note that “break the bridge” is fine, but it is a metaphor, so I have to respect the nature of bridges, which stretch over areas of water and land. They do not go over “juicy” things. Moreover, the issues the author in question was discussing weren’t actually full of juice. They were interesting, and “juicy” is thus also a metaphor.

Bridges and juicy? No!

So, that is a mixed metaphor.

I did not respect the properties of the thing I used as a comparison, or in other words, the thing I used as a comparison didn’t behave the way it should behave. If I call a lifehack a “magic wand,” I need to keep the comparison consistent with magic wands. I can say it made a new car appear out of thin air, but I can’t say it gets me 15 percent off my car insurance. Or rather, if I do, I have a mixed metaphor and deserve derision.

A little Googling lets me share these mixed metaphors from people who are more famous than I am: 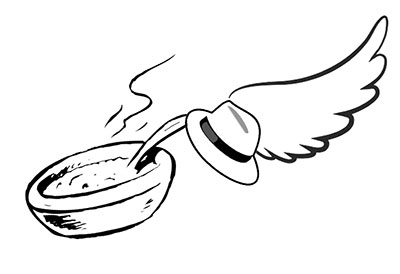 OK, so now that we know what a mixed metaphor is (and how brainless they can make us look), what are the tips to avoid them?

As I indicated above, the point of comparison needs to be treated like what it actually is. If you’re comparing something to a cloud, a cactus, or a combustion engine, then keep things wispy, prickly, or sparky.

Watch out for metaphors inside clichés.

The worst problem with clichés isn’t that they’re dull; it’s that they’re usually inaccurate. So you may easily find yourself employing a cliché that doesn’t fit your situation and then trying to force it to fit better.

Let’s say you’re talking about how difficult it was for the members of your committee to agree on anything. So you say something about “finding common ground” and then end up saying you all finally got “on the same page.” Now you’ve mixed your metaphors because neither of these clichés says what you want to say, which is that the committee had nothing in common and was as divided as ever, but they argued a lot and finally agreed on some propositions for whatever reasons they personally had. They neither found “common ground” nor were “on the same page” at the end.

So, if the cliché doesn’t fit, don’t bring in another cliché to pretend it does. Don’t use it at all.

Be aware of when you’re using a metaphor.

English is stuffed with metaphors so old and so common that we forget they’re actually metaphors. These are sometimes called “dead metaphors” because they no longer make people think of the thing that is being used as a comparison. Check these out:

As is so often the case with writing, avoiding mistakes with metaphors is mostly about paying attention to what you’re trying to say. Employ metaphors when they work for you, not when they’re convenient or familiar.