September 6, 2019 by ProofreadingPal in Professional Writing

Last time in this series, we talked about formal versus informal citations when referring to other people’s work in fiction and nonfiction writing, as well as what to do when you’ve been inspired by someone else’s work.

This time in our plagiarism avoidance master class, we’ll discuss some even murkier areas dealing with the difference between copyright violations and plagiarism and how to refer to common sources.

Plagiarism and the Public Domain

Public domain works are tricky for authors who want to cite them. These works have an expired copyright (e.g., written before 1923) or were never under copyright to begin with (e.g., government documents).

But that doesn’t mean you can pass off that work as your own. That’s the difference between a copyright violation (legal issue) and plagiarism (ethical). Note that the ethical issue can sometimes means much more trouble for you.

In copyright violation, you’re using or redistributing a work that someone else has the legal right to profit from; in plagiarism, you’re claiming credit for the work someone else did and passing it off as your own.

So what if something is in the public domain and everyone knows that source? Do you still have to cite it?

Ethically, yes. You wouldn’t want someone to claim your work as their own when you slaved over a hot keyboard to create it, so you shouldn’t do that to someone else. However, sometimes we all just know that “Cow diddle diddle, the cat and the fiddle” isn’t original.

Plagiarism.org has a great example of this. Shakespeare’s works are in the public domain, so you’re free to print a book of his plays and even sell it. But to avoid plagiarism, you have to ensure that the book openly and clearly credits William Shakespeare as the author, not you, Josaphine Bloggs.

Things can get really tricky when you’re referring to a common source—in the public domain or some popular source like lyrics or catchphrases—within your work.

It was the best of times; it was the worst of times. He had spilled his ice cream down his shirt, but at least now he was covered in happy puppies licking it off.

That lifts its first sentence from Charles Dickens’s A Tale of Two Cities and should technically be cited. However, most people know that you didn’t create this phrase, so it falls under the fair use doctrine, in which you’re allowed to borrow a very limited amount of someone else’s work if you thoroughly transform it in your own. 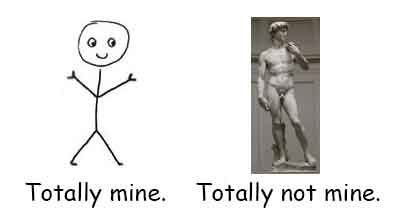 Most well-known sources fall under this general rule. If an average person can recognize the original source and you have used only a brief snippet of that source and you have completely repurposed or transformed it into original content, then it’s (usually) okay to leave out the citation.

Can You Plagiarize the Bible?

We’ve blogged about Christian publishing standards and how to quote passages from the Bible. But many writers include scriptural passages in their work, often going beyond the “brief snippet” test mentioned above. Is that plagiarism?

The Bible is in the public domain, both because it’s ancient and because it’s considered by believers to be the Word of God that belongs to all of humanity. So, you can freely quote from it all you want (legally) as long as you aren’t claiming that the words are your own (ethically.

(Please note that some modern, “new interpretations/translations” of the bible may be under copyright. Quoting them needs a citation.)

So saying “the Bible says” or “according to the Bible” and quoting a passage is just fine. Passing off a psalm as your own or trying to publish the Song of Solomon as a chapbook of your own poetry, however, would be plagiarism.

It’s considered good practice to cite the book, chapter, and verse of any biblical passage you include in your work, as well as providing the translation you used as a formal citation at the beginning or end of your work.

How to Avoid Plagiarism

In general, avoiding plagiarism is about being clear, accurate, and honest with where you got ideas or material in your work.

• Where possible, include the source, either with a formal citation or a brief in-text mention that indicates it came from somewhere else coupled with a resources list at the end.
• Be open about your inspirations. Thank the author who inspired you in your acknowledgements, or find other ways to give them credit for their own hard work.
• If you’re not sure where a passage came from, Google it, run your work through a plagiarism checker, or otherwise double-check your own memory.

Remember: Do unto others as you would have them do unto you (Matthew 7:12). You wouldn’t want someone to steal your ideas and use them as your own with no credit, so don’t make that mistake in your own writing.