Poetry Tools to Enhance Your Prose: Varieties of Rhyme

October 24, 2019 by ProofreadingPal in Writing Guides

Rhyme seems far less applicable to ordinary writing. The poetic element might presumably overwhelm the informational function of the passage.

But rhyme can be understated, and it comes in more flavors than you might think. In the academic field of prosody, rhyme refers to any repetition of similar sounds, anywhere within a phrase, and not strictly to the final syllable. These repeated sounds are the key to crafting phrases that are catchy without seeming contrived. Let’s explore.

This is what we usually think of as rhyme: two words or phrases in which the final stressed syllable and any following syllables share the same pattern of vowel and consonant sounds. It’s possible to have perfect rhymes of a single syllable (think and sink), two (pretty and city), three (generate and venerate), or even more (vocabulary and constabulary). The total number of syllables in the paired words can be different (e.g., hilarious, with four syllables, makes a perfect rhyme with various, which has only three). You can even rhyme a single long word and a phrase made of several shorter words (e.g., matador and at a door).

Perfect rhyme can’t help but draw attention to itself, so subtle deployment is rarely an option. But note how often we use perfect rhyme in everyday speech, in phrases like backpack, true blue, and downtown. Because rhyme in all its varieties is a powerful mnemonic device, it underlies hundreds of memorably “sticky” phrases (e.g., You snooze, you lose).

Also called “head rhyme,” alliteration matches the sounds at the beginning of two or more words, as in the phrase “short sharp shock.” In fact, alliteration, rather than end rhyme, was prevalent in Old English poetry (e.g., Beowulf) long before end rhyme became common. 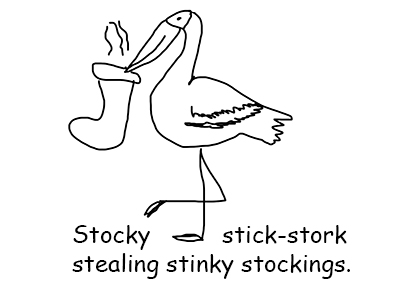 Alliteration shows up in many everyday phrases (e.g., boy band, safe and sound, hot-headed). It’s a popular technique for creating memorable brand names: Coca-Cola, Bed Bath & Beyond, and, for that matter, ProofreadingPal.

Because it’s so obvious (and so associated with marketing), alliteration is largely inappropriate for formal writing. It’s okay when it occurs naturally in a phrase like the Big Bang theory, but when overused alliteration can lend your prose the tone of an old comic book, promising a pulse-pounding panoply of pictorial pandemonium!

Now we get into the weeds and into sound devices useful to the general writer. Rather than matching sounds at the beginnings of words or full syllables at the end, the various forms of slant rhyme play on similar sounds in the bodies of words.

In slant rhyme phrases, the sounds contrast instead of match, allowing for effects that are just as “catchy” but more subtle and varied than either perfect rhyme or alliteration.

There are many varieties of slant rhyme. As with rhythm, learning the terms is less important than cultivating a feel for the effects, but there are two key terms worth knowing.

Consonance matches the consonant sounds of a word pair while using contrasting vowel sounds. The parallel can be exact (e.g., tick-tock, shipshape, rag rug), where the two halves of the phrase simply swap out vowels, or partial (e.g., cakewalk, Band-Aid, cellar door).

Assonance, matches the vowel sounds with different consonants (e.g., cold open, light a fire, dead reckoning). The effect of assonance can be quite subtle because vowels tend to read as “weaker” than consonants. Compare the effect of a two-syllable assonant phrase like “bake sale” with a similar consonant phrase like “nick-knack,” for instance. And when the matching sounds are spaced out in a phrase like “time will show the wiser,” the line has the musicality of poetry without seeming overblown.

The techniques of consonance, assonance, and alliteration can be mixed and matched for a truly dizzying array of half-rhymes (upsy-daisy) , oblique rhymes (one tongue), and semirhymes (flak jacket). These are commonly used in song lyrics, especially rap. Take a listen.

Understanding the varieties of rhyme can open your eyes to the joy of language. We live in a world of words, and there’s poetry all around us, if we learn to see it.