July 15, 2017 by ProofreadingPal in Writing Guides

In the past columns, we’ve talked about using adjectives to draw comparisons and contrasts. We’ve mostly focused on vocabulary, that is, on choosing the appropriate adjective for the occasion. Today let’s look at how to use comparisons themselves in a meaningful way.

The One and Only

Any discussion of comparisons must note that there are some adjectives to which comparisons don’t apply. Foremost among these (or at least the most often misused) is unique. This misunderstood adjective doesn’t just mean “rare” or “special” or “unusual.” It literally means “one of a kind” (from unum, Latin for “one”).

Consequently, “unique” is not a comparable adjective; it describes an absolute state. Something is either unique, or it is not; it can’t be more or less unique than anything else. For this reason, “unique” really doesn’t require or benefit from a modifier. It is nonsensical to speak of something as “highly unique,” or “somewhat unique,” or (shudder) “one of the most unique specimens.”

In fact, the only time “unique” should be modified is when you’re talking about something that is not one of a kind. An extremely rare occurrence or item may be described as “almost unique.” In most cases, though, if you mean “unusual” or  “scarce” or “noteworthy” or “precious,” you should just use those words.

Some Things Are Better Left Unsaid

We use writing to communicate. If we wish to be understood, we must aim for precision. And so to ensure clarity when using comparative language, we must include a point of comparison. As a principle, this sounds obvious, but as with most points of English usage, there’s a fair bit of nuance when we put it in practice.

For instance, the point of comparison need not always be stated outright. In everyday writing, we can often infer it from context. Consider this statement:

Children who eat a full breakfast every morning get better grades in school. 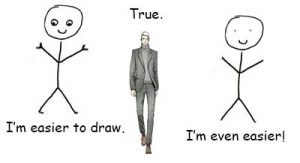 Checking the mirror, Tom noted with alarm that the pimple had grown bigger.

Again, we have a comparative adjective, “bigger,” without an explicit baseline for comparison. Bigger than what? Bigger than a breadbasket? No. The reference point is not an absolute size at all. “Bigger” here simply indicates the continuation of an ongoing process. We may assume that the pimple is bigger than it was the last time Tom checked his reflection; we may further assume that its growth has been steady during the intervening period. We can use this sort of construction for the continuation of a process:

With every step, Bethany drew nearer to the city.

The beginning of a process:

The show gets better about six episodes in.

Or the reversal of a process:

The sun rose, and the day grew warmer.

In all cases, the presumed gauge for comparison is the state of the subject at some previous point in time.

But this isn’t the case all the time.

The constructions above are effective because they are all very simple. Each has a single variable and a clear chain of reasoning. But this is not always the case, especially in academic or scientific writing.

Sometimes, clear writing demands that you be very specific indeed in defining your terms. The statement “A Jaguar is the best car out there,” for instance, is so broad and vague as to be effectively meaningless. We can narrow it down with “A Jaguar is better than a Cadillac,” but that doesn’t really clarify anything. The problem is not that the construction is missing a direct comparison; it’s that the metric is undefined.

“Better” is a value judgment. We judge value by how objective qualities align (or fail to align) with our desires. How a Jaguar better than another car is the point. Objectively, it has a powerful engine, retains a high resale value, and conveys a certain social status; but these in themselves do not make it “better.” Indeed, depending on our circumstances, those qualities may be undesirable. If I live in a high-crime area and rely mostly on public transit, I want a car that’s inconspicuous, inexpensive, and cheap to insure. A Jag would be a terrible choice for me.

A truly meaningful comparison will explicitly address relevant metrics. “The Jaguar XJ has greater horsepower and a tighter turn radius than the Cadillac ATS” contrasts meaningful measures of performance, identifying both the objective quality and the desire it satisfies.