February 20, 2018 by ProofreadingPal in Editing Tools

The end purpose of any writing tool or technique is to help you express yourself more clearly. Lists can be particularly useful for this, especially in dense academic writing. Presenting important information in discrete items, rather than a block of text, can alleviate visual clutter and even provide a key to structuring your piece.

Yet the leading academic style guides provide little guidance for using lists. Neither the APA Publication Manual nor the MLA Handbook addresses the subject directly. So we’re taking our cues from ProofreadingPal’s default authority: The Chicago Manual of Style.

The CMoS uses the term “run-in” to indicate a list that occurs in the body of the text; a numbered or bulleted list is “vertical.” The editors explicitly prefer a run-in style when the list in question is short and simple, or when it is part of a complete sentence.

Scripture tells us that the three great virtues are faith, hope, and love.

Baseball is a simple game: You throw the ball, you catch the ball, and you hit the ball.

At the Epiphany, three astronomers, who go unnamed in the Bible but are traditionally known as Caspar, Melchior, and Balthazar, are said to have brought the infant Jesus gifts of gold, frankincense, and myrrh.

Note that this last passage is grammatically complex with two brief run-in lists. We can summarize the sentence very simply: On this day, astronomers brought gifts. The lists only add descriptive detail. Formatting them vertically would not clarify anything.

Run-in lists may be divided with numbers or letters, if doing so improves the clarity of the passage. Enclose these indicators in parentheses. When items have a specific sequence or order, identify them by number:

Personnel captured on the battlefield are not required to reveal any information except their (1) name, (2) rank, and (3) serial number.

When items are part of a set but the specific order of presentation is not crucial, use letters.

The branches of the federal government are (a) the executive, (b) the legislature, and (c) the judiciary.

For practical purposes, even if the number of items in the list is significant, a short, simple list does not need to be enumerated if the number is mentioned in the introductory passage:

Bread is a staple food in part because it requires only four ingredients: flour, water, yeast, and salt.

Even a longer run-in list—in this case, seven items—does not always need to be enumerated, if its contents are incidental to the meaning of the passage.

Not every winter festival takes place in a single day. Chanukah, for example, plays out over eight nights, while Kwanzaa lasts seven days, each dedicated to one of the seven principles of African heritage: unity, self-determination, collective work, cooperative economics, purpose, creativity, and faith. Even Christmas officially lasts twelve days, from December 25 until the feast of the Epiphany.

The passage isn’t really about the seven principles of Kwanzaa—it’s a general overview of December holidays, with Kwanzaa mentioned only in passing.

Load Up with Bullets

Vertical lists become important when the items represent an organizing principle—that is, when the list acts as an outline for the body of your piece, either in part or as a whole.

For instance, let’s revisit that little passage about bread. It’s the sort of sentence you might read in an anthropology paper; the important takeaway is that bread is popular worldwide because it’s easy to make. But let’s suppose that instead of an academic paper, we’re writing advertising copy for a bakery and that the ingredients in the bread are the actual topic.

Here at H.P. Loafcraft Artisanal Breadworks, we use only the freshest ingredients: 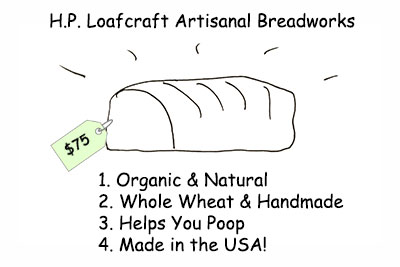 This is an unordered (bullet) vertical list. The sequence of the items is not crucial; we can present them in any order.

A vertical list, whether ordered or bulleted, should be introduced by a grammatically complete sentence ending with a colon. Items in an unordered list do not have to be complete sentences, but entries should follow the same grammatical form; they do not have to begin with a capital letter, although the CMoS allows some wiggle room here if the items “require more prominence.” Whether you choose to capitalize or not, remain consistent from item to item and from list to list, if your document has more than one.

Note too that these items, being sentence fragments, have no ending punctuation. If your items are complete sentences, capitalize and punctuate them accordingly.

Ordered lists work much the same way. Introduce them with a grammatically complete sentence and a colon. For numbered lists, however, it is customary to begin each item with a capital letter even if the items are not complete sentences. You may (but do not have to) choose to structure the list itself as a grammatical unit, as I’ve done, linking items with commas and that penultimate “and,” and ending with a period.

Over the Kwanzaa festival’s seven nights, participants celebrate the seven principles that have given strength to the African diaspora:

Using a run-in or vertical list depends on your goal. Compare this to the earlier passage on winter holidays; here, the focus is clearly and exclusively on Kwanzaa, and we can expect from the content of the list that subsequent paragraphs will expand on these seven topics, one by one. That’s the organizational principle at work.

There’s a saying in architecture, “Form follows function.” So the form your list takes should follow from the function it serves. If it’s incidental or auxiliary to your main point, leave it as a run-in, but if it provides the key to your document overall, set it apart visually by giving it a vertical layout, ordered or unordered as needed.