February 4, 2020 by ProofreadingPal in Writing Guides

Let’s round out this series with a final look at some of the rhetorical devices in the poet’s toolbox. As we’ve seen in the previous blogs in this series, the vocabulary of prosody and rhetoric consists of words for things you’ve almost certainly done in everyday speech or writing, but for which you never knew the name. Most of those names are Greek because the ancient philosophers took rhetoric very seriously indeed and attempted to catalog every possible linguistic maneuver that might make a passage of prose more persuasive or memorable.

Today, we’ll learn about three of them.

Before we begin, a caution: approach these tools with discretion. The kinds of figurative language described in this installment are not appropriate for most academic writing, where panache must occasionally be sacrificed for the sake of clarity. For less rigorous types of informational writing, such as business communications or informal reports, they represent ways to add color and spice to your message. Use them wisely!

Anaphora (pronounced uh-NAFF-ruh, roughly) is the repetition for emphasis of a word or phrase at the beginning of multiple clauses in a passage. The word derives from a Greek root meaning “to carry back.” You’ll find examples of this device all through our culture, in high art, popular entertainment, and everywhere in between. It was common in ancient Hebrew verse, and is found throughout the Bible, as in this extract from Matthew 5: 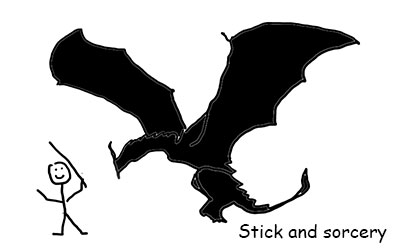 This is a particular kind of idiomatic expression related to a synecdoche. While in the former a single element related to a thing or concept stands in for the concept itself (e.g., “Hollywood” becomes shorthand for the entertainment industry) a merism (MER-izm, with the e as in “terror”) uses multiple related elements, usually two, to accomplish the same task. When someone uses “white tie and tails” to refer to formal evening dress, that’s a merism. So is writing “sword and sorcery” as a code phrase for the heroic fantasy genre, or referring to a populist economic program as “bread and circuses.”

Merisms tend to be stock phrases; many of them are very old, and the elements to which they refer may be obsolete. For instance, we’re pretty sure that the CIA and other modern intelligence services no longer outfit their agents in flowing capes, and give them guns rather than stilettos: yet we still refer to espionage as “cloak and dagger.” The merism persists though the elements no longer literally apply.

This figure of speech, a subspecies of metonymy, uses an epithet—that is, a descriptive phrase or title that has become attached to a particular noun, usually (though not always) a proper noun—in place of the noun itself.
That probably sounds pretty esoteric. But chances are you know dozens of these epithets without even realizing it. An antonomasia—Greek for “to name differently”—be applied to a person (“The King” for Elvis Presley; “Il Duce” for Benito Mussolini), a place (“The Hub” for Boston; “The City of Lights” for Paris), or an organization (“the Bronx Bombers” for the New York Yankees). Antonomasia can also be used generically, as with “the boys in blue” as a general term for police officers. There are even epithets for abstract nouns: the sport of kings, the dismal science, America’s pastime, the oldest profession.

As with most idioms, epithets tend to be culturally specific. If your audience’s cultural background differs from your own, these nicknames might not translate, so use particular care.